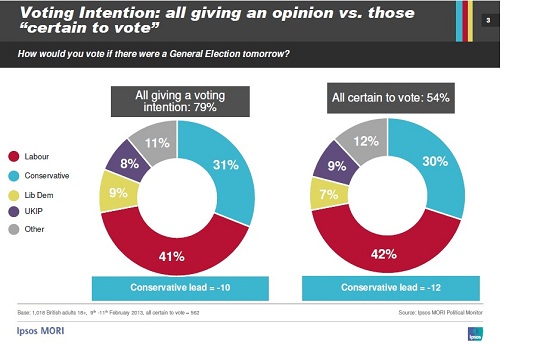 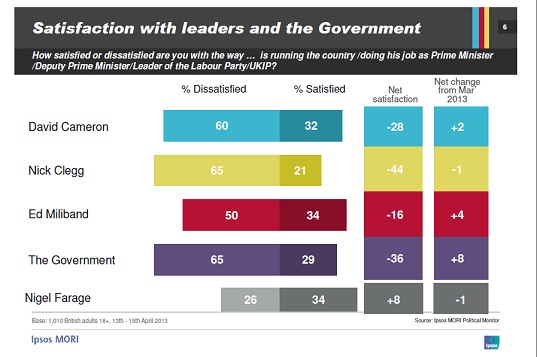 Ipsos-Mori have published their political monitor for February.

The changes are from last month.

Labour will be delighted to maintain a double digit lead with Mori.

For the Liberal Democrats, they have fallen to their lowest poll rating with Mori since April 1990.

What this means for the Eastleigh by-election, in one respect, polling like this may help Nick Clegg and his party, if they retain the seat, they can point out, despite the opinion polls showing them in single digits, they can still retain seats, despite the unfortunate reasons for the by-election. If they lose the seat, and they are polling at this level, then speculation about Nick Clegg’s future as Leader may increase further.

UKIP will be very happy to see themselves maintaining a lead over the Liberal Democrats with a phone pollster for a second month, as previously the UKIP leads over the Lib Dems was limited to the online pollsters.

Finally there is no evidence gay marriage or Cameron’s speech on the EU have moved votes, for any party.

â€œDespite everything that has happened in Westminster â€“ and Brussels â€“ over the last month it doesnâ€™t seem to have changed the underlying level of public support for the major parties. However, this poll confirms that last month was not just a blip for the Liberal Democrats as they are once again in fourth place, behind UKIP.â€

Nick Clegg’s rating’s have fallen from minus 33 to minus 40 this month.

Ed Miliband’s ratings have increased by 1 from minus 12 to minus 11.

David Cameron’s ratings have increased by 1 from minus 25 to minus 24.

David Cameronâ€™s satisfaction ratings are now in line with those of Gordon BrownÂ at the same point in his premiership. His net rating of -24 (34% are satisfied with David Cameronâ€™s performance as Prime Minister and 58% are dissatisfied) is exactly the same as Gordon Brownâ€™s after 34 months as Prime Minister â€“ albeit this was in fact Mr Brownâ€™s last month in office and in the middle of a general election campaign.