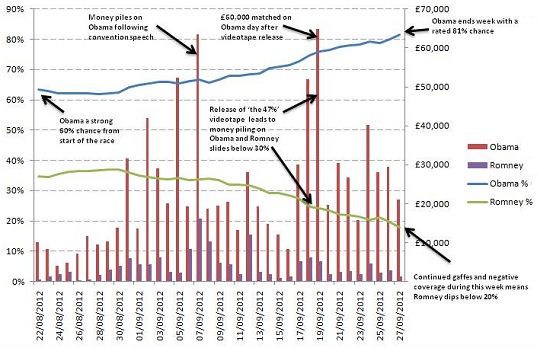 Plus the latest RCP averages from the key swing states

In a new article on the excellent 538 blogNate Silver makes the following observation about the impact of the 47%.

“After aÂ secretly-recorded videotapeÂ was released on Sept. 17, showing Mitt Romney making unflattering comments about the â€œ47 percentâ€ of Americans whom he said had become dependent on government benefits, IÂ suggested on TwitterÂ that the political impact of the comments could easily be overstated.

â€œNinety percent of â€˜game-changingâ€™ gaffes are less important in retrospect than they seem in the moment,â€ I wrote.

But was this one of the exceptional cases? A week and a half has passed since Mr. Romneyâ€™s remarks became known to the public â€” meaning that thereâ€™s been enough time to evaluate their effect on the polls.Thereâ€™s a case to be made that they did damage Mr. Romneyâ€™s standing some.”

For the latest polling news on both sides of the Atlantic check out my Twitter feed.