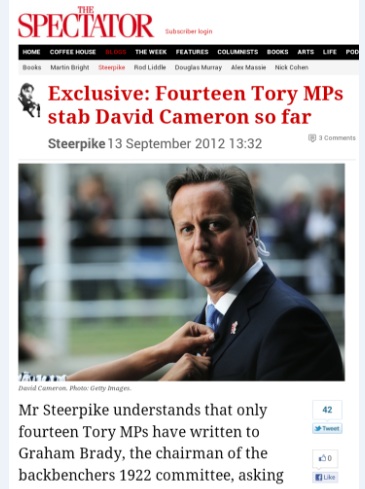 Could this be for real?

According to the Steerpike blog at the Spectator formal efforts have started to try to oust David Cameron.

He writes: “Mr Steerpike understands that only fourteen Tory MPs have written to Graham Brady, the chairman of the backbenchers 1922 committee, asking for a leadership contest to oust David Cameron. Although the names officially remain a secret, fourteen is the number that the PMâ€™s enemies believe that they have secured so far..”

Under the Tory leadership rules a total of 46 MPs would have to put their requests in writing asking for a contest – so there is quite a long way to go.

But the interesting news is that, if Steerpike is to be believed, moves have already started.