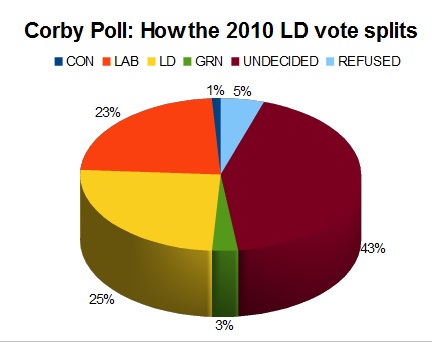 All the focus should be on the LD undecideds

For me the most significant polling data that we’ve had since the 2010 general election was the 1,500 sized sample Ashcroft phone poll of Corby voters ahead of the Westminster by-election due to take place in November.

This was in one of the seats that the Tories won in 2010 and which they have to hang onto and more if they have any hope winning a majority. The poll came out just as I was getting ready to go on my holiday and I’ve only now started to examine the detail.

Unlike national polling where those sampled are asked what they’d do in a hypothetical election “tomorrow” this was about a real election that’s due to take place in the coming months. The voters will have to make a choice.

As expected the Ashcroft poll was in line with national polling in showing a big collapse for the Lib Dem party which chalked up a respectable 14% in the seat behind Labour and the Tories in 2010. The chart above shows how those general election Lib Dem supporters are currently split and a massive 43% said they didn’t know.

Of the 2010 Lib Dems who did give a choice Labour was picking up an astonishing 23 votes for each one that going to the Tories.

On top of that the Greens were the choice of three times as many ex-LDs as the Tories.

If a similar thing is happening in other CON-LAB marginals which were won by the blues last time then the Tories are in very serious trouble – far worse than the standard seat projections are pointing to.

The real focus for Tory planners, I’d suggest, should be that very sizeable group of Lib Dem voters from last time who have yet to make up their minds. They are critical because they are voters and represent a far bigger slice of the electorate than UKIP and broadly they occupy the centre ground.

Those in the blue team who think that appeasing the right is the route to electoral success are fools – but my guess is that they are likely to prevail.