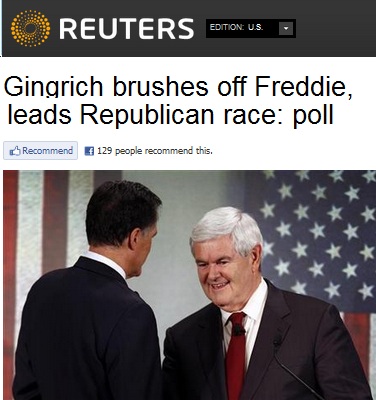 Another pollster has Gingrich in the lead

The controversial ex-house speaker, Newt Gingrich, has moved into the lead in the GOP nomination race, brushing off concerns about his work for a troubled housing finance company.

The latest survey, by Ipsos for Reuters has 24% of registered Republican voters supporting him – an increase of 8 points from roughly a week ago. Crucially the poll, was conducted on November 18-19 and after the allegations about his role working for Freddie Mac. In second place is Mitt Romney down 6% to 22%.

In a sign of further relief for Gingrich, 46% of those polled said the revelations that he had received up to $1.8 million in consulting fees from the company had no impact on their view of the candidate.

My sense is that the sure-footed way Newt has handled himself over the past days has won him support. His “baggage” rather than being a threat has become a platform to show how he copes under pressure.

A Fox News poll released on Wednesday also showed Gingrich ahead. That survey, however, was conducted before the Freddie Mac connection and other news stories about his business ties had fully played out.

In terms of betting the 9/2 you can get on Newt with Betfair for the nomination is far better value than the 1/2 on Mitt. It’s certainly where my money has gone this weekend.