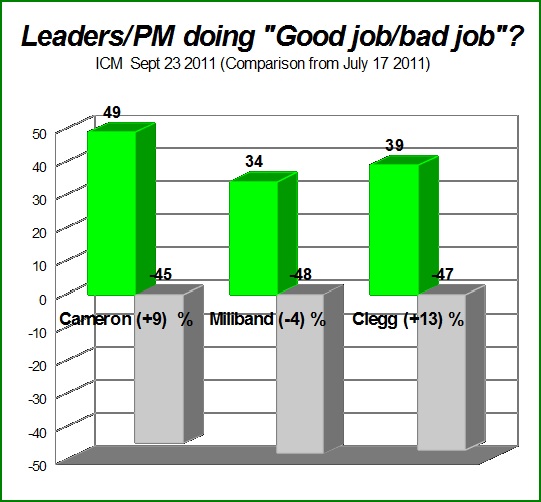 Can Ed turn thing round at his conference?

As well as the voting intention figures in the latest ICM for the Guardian there are the firm’s leadership ratings which ask the question of whether the PM/leaders/etc are doing a good or bad job. Cameron sees a substantial boost but the biggest winner in terms of change is Nick Clegg.

As we saw in the previous thread the voting intention figures had the Lib Dems down three points which must have been a real disappointment given that the survey coincided with the party’s annual conference when they were getting a lot of media coverage.

But the position in the leader ratings, however, is totally different with Clegg seeing a substantial improvement – a net 13% – on last July and, on every figure, now doing better than Ed Miliband.

Clegg has higher positives and smaller negatives than Ed which is even the more remarkable given Labour’s return to a lead on voting intention from the pollster.

Other findings are not good for Miliband. Only 28% of of those sampled agreed thought that he had the right qualities to become PM. Amongst Labourâ€™s own supporters only 51% agreed. To another question on whether Miliband was the right leader for the Labour party just 30% agreed. Amongst Labour voters the proportion was only 49%.

The only consolation in the ICM numbers for Miliband is that he’s doing better than shadow chancellor Ed Balls â€“ who has not previously been included in the survey. Just 27% say he is doing a good job and 45% bad.

This is not good for the Labour leader on the first anniversary of his election and the start of his party conference.

My main caveat, as I repeat every year at this time. is that polling in late September and early October can get distorted by the party conferences.