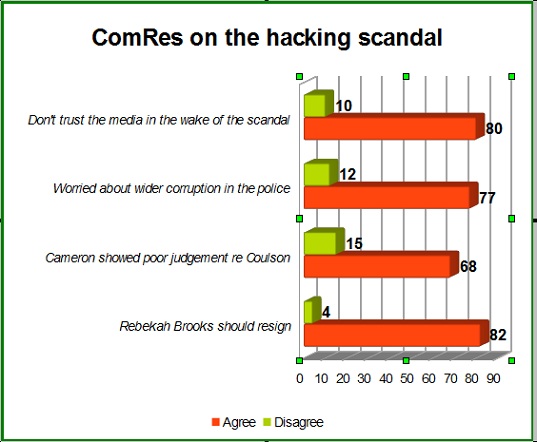 And just 4% think Rebekah should NOT resign

Overnight there was a ComRes poll for ITV news on the hacking scandal and like other surveys the sample was pretty unequivocal in its views.

Fieldwork took place from Friday until Sunday with most respondents answering after Andy Coulson arrest and subsequent bailing.

As well as the main figures what is interesting is the relatively small proportion of those polled who had no view on the hacking related questions. That suggests that people are taking an interest.

What we don’t get from this form of polling is how strongly people feel and how much it impacted on their views of the party leaders which historically have been the best pointer to electoral outcomes. MORI, which has been asking approval questions in the same standardised form for more than three decades, should be out within the next week or so.