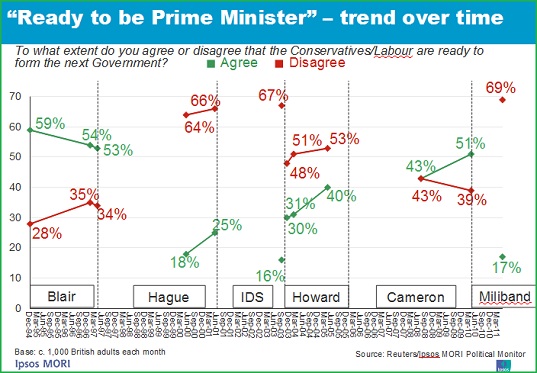 Will Labour find cold comfort in the IDS comparison?

The Ipsos-MORI data on Ed Miliband is getting a lot of coverage today and I thought that this chart puts the “ready to be PM” responses into an historical context.

It shows the trend with all opposition leaders from Tony Blair onwards and, interestingly the man who was to lead Labour to three election victories had a positive rating of 59 to 28 six months after he took over the job.

William Hague dropped to a low of 18% on this measure but that’s still ahead of today’s numbers for Miliband. His 17% level of agreement is at least one point higher than Iain Duncan Smith enjoyed a month before he lost the no confidence vote in October 2003.

But on negative ratings today’s Ed Miliband 69% is higher than all of them. Cameron’s worst negative figure was 43%.

UPDATE: On looking at the way Ipsos-MORI have created this graph I do think that it is misleading particularly in relation to Cameron and Miliband comparisons. The question was not put at that stage of Cameron’s leadership. However that does not detract from the main point that these are not good figures for the Labour leader.

UPDATE 2 Ipsos-MORI have revised their chart to deal with the criticisms. The replacement is now at the top of the article.