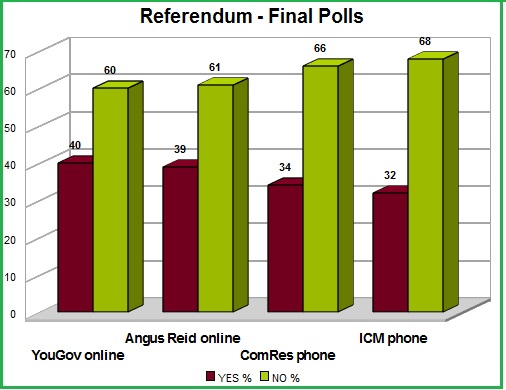 What’ll be the impact of such an overwhelming defeat for YES?

The final AV referendum polls are coming out and the latest, from ICM, has NO with an overwhelming 68-32 lead. If the split is anywhere near this tomorrow it will be a devastating blow to Ed Miliband and Nick Clegg.

There’s no consolation for them in the figures which represent a remarkable victory for David Cameron who has campaigned so effectively against the changes.

Still to come are final polls from YouGov and Angus Reid – which led the field in terms of accuracy in this week’s Canadian general election. I’ll update this as soon as I get the numbers.

It was ICM, it will be recalled, two and a half weeks ago that first reported that NO was moving towards an unassailable lead. Then it was just 16% – tonight’s gap is 36%.

UPDATE The chart above has been amended to include the final poll from YouGov – a 60-40 split. We are still waiting for Angus Reid.