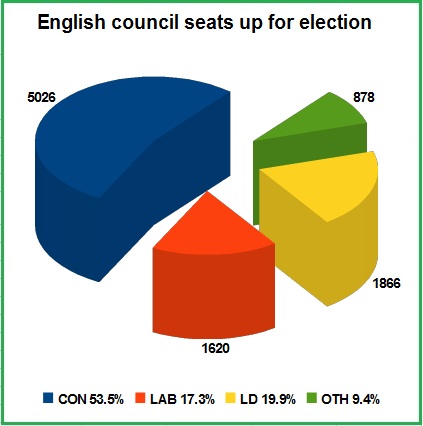 Is this the most important of the 4 battle-grounds?

There are four distinct contests on May 5th but only one which will provide real pointers as to the scale of the Labour recovery – the English local elections.

A good result in Wales looks like a banker but the Ed Miliband-backed YES2AV campaign looks doomed and the latest polling suggest that the red team’s hopes of coming out top in Scotland might have been thwarted.

It was in England on May 6th 2010 where the Tories took 89 seats off Labour thus paving the way for the coalition and it’ll be in England where we should be looking for signs of a Labour come-back.

The Labour spin team have been keen to dampen expectations for the English council elections but that’s proving quite hard given the very low point from which the party starts.

The pie chart above sets it out – Labour is defending just 17.3% of the council seats up for grabs and even if they secured 1,000 gains the party would still only have 27% of them.

All three of the leading academic election specialists, Professors Rallings, Thrasher and Curtice have set 1,000 gains as the minimum target – and if Labour did chalk up so many the party will still not have recovered the 1,300 council seats lost on the previous two occasions when most of these were last fought.

Clearly the Lib Dems are going to have a bad night and will lose a clutch of councillors where they are head to head with Labour. They could also lose quite a number in LD>CON contests if Labour supporters don’t tactically vote in the way they have in the past.

I find it hard to see how Labour can fail to meet the target.