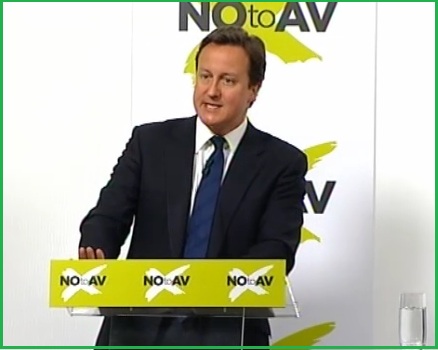 Now will blue critics stop sniping at him?

If the AV referendum does end up with an outcome close to last night’s ICM’s 58-42 to NO it will be a massive victory for David Cameron and an overwhelming vindication of his strategy of creating the coalition so he could take power last May.

Ever since that event on May 11th 2010 the Tory right has been muttering against him and increasingly they’ve tried to dub him “an election loser” with implied threats of what might happen if his referendum gamble failed.

On Sunday I took part in a couple of radio discussions with right-wing journalists Mary Wakefield and Iain Martin and I was taken back by the sheer vehemence of their hostility to the Tory leader.

Well they are never going to love Dave but the referendum outcome looks set to underline emphatically that he is an election winner and it’s going to be much harder to snipe at him.

The reason why I’m pretty convinced about this poll is that ICM sought to measure turnout by, where applicable, trying to ascertain in their normal non-judgemental way, the relative likelihood of those sampled taking part in the local elections. As I’ve argued for weeks that had to be the key element and local election voters are more likely to be older and in the groups other polling has identified as fertile ground for those who who don’t want change.

ICM, as ever, has just been more sophisticated in its approach to the polling

The one danger now for NO is that the more Cameron looks set to win on May 5th the more Labour supporters might want to vote against him. The poll itself could influence the voting.

Hopefully ICM will be doing another survey using the same approach before the big day.

The news of the poll came out last night just as we were gathering for the PB party in London and I was unable to bet. Currently Betfair has NO as a 1/3 shot.