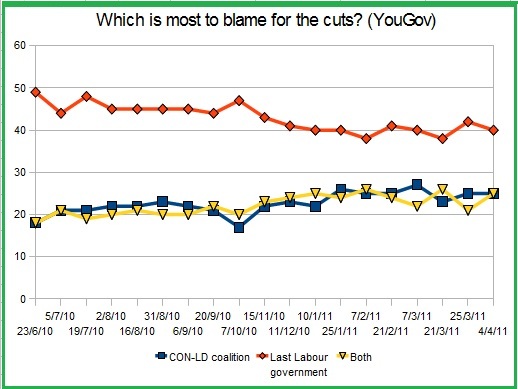 The latest YouGov “blame game” tracker is out and shows a slight improvement for Labour with the gap at 15 points.

Every two weeks YouGov panellists are asked the same question on which is most responsible for the spending cuts. As can be seen Labour has continued to attract substantially more blame than the coalition though the situation is a lot better than it was last June. But things have remained fairly static since November.

This is one regular non-voting intention question that I regard as particularly important and cover regularly.

The coalition’s repeated rhetoric that it’s all the last government’s fault looks set to be the key argument over the next four years – the question is whether or not it is still resonating.

Most polling on the cuts finds people not supportive of specific measures or that they think that it should be at a slower rate. But the bigger question of who is to blame is central.

Labour needs to find a way of narrowing this gap. Whatever the voting intention numbers might say I don’t believe that Ed Miliband will be able to win a majority with a big deficit in this tracker.

Coming up today: We should see the detailed lists of nominations for the May 5th local elections.