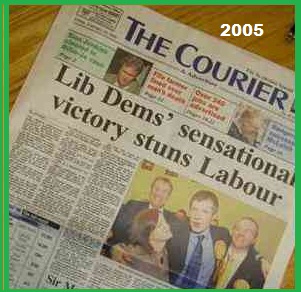 If so, how does Clegg build a new one?

The Barnsley Central by-election was not a resounding success for any of the main three parties. Labour regained most of the share they lost at the general election but still polled a smaller proportion than in 2005, the Conservatives lost half their share and were beaten by UKIP, and the Lib Dems lost their deposit, more than three-quarters of their share and finished sixth. That more than a quarter of the votes went to minority parties tells its own story.

It would be easy to dismiss Barnsley Central as the sort of by-election result prone to overanalysis. It was in a safe Labour seat, with Labour in opposition and the other main parties taking unpopular decisions in government. And that is indeed part of the story.

Itâ€™s not the whole story though. For one thing, the once-formidable Lib Dem election machine has been stuttering a bit of late, even before they entered government. Itâ€™s over five years since there was a Westminster by-election victor wearing a yellow rosette and unless thereâ€™s one before the end of June, it will be the longest period without a Liberal / Alliance / Lib Dem win since the 1950s. Similarly, the general election campaign, while delivering more votes and vote share, resulted in a net loss of seats.

Whatâ€™s really turned things around was entering government. Both the Lib Dem coalition of voters and the campaigning techniques have probably become unsustainable now theyâ€™ve taken office. The famed bar-charts and â€˜two-horseâ€™ race leaflets were based on the assumption that the party was, in AV-terms, transfer-friendly; that natural supporters of other parties could be squeezed and persuaded to tactically vote Lib Dem in order to beat whoever else was most in contention.

That assumption may no longer hold, certainly it wonâ€™t do as widely as it used to. That it did was because where they stood a chance, the party and particularly the candidate were usually seen as local, a bit independent, hard-working, and with policies that were inoffensive to a large enough proportion of the electorate. Being in government negates a lot of that as the national picture overshadows the local to a greater extent and massively reduces the scope to be the party of protest. In retrospect, pushing for the Â£10k Income Tax threshold rather than fighting against tuition fees in the coalition negotiations looks to have been a tactical mistake too.

The status quo ante is therefore not something to which the Lib Dems can return: they are in government and will be associated with its actions for years to come. To recover their former position will mean building a new coalition and using new arguments.

How the Lib Dem activists react to this reality will be critical in determining whether and, if so, how quickly they recover. Defending a governmentâ€™s actions will be a new and uncomfortable position for many, especially a Tory-led one that took office with a Â£150bn+ a year hole in its books. It is hard enough for the Conservatives or Labour to suffer the kind of reverses normally seen mid-term. It will be even more so for the Lib Dems, with their smaller base and previous successes built on a huge amount of hard work.

To that end, the AV referendum result really is assuming tremendous importance, not least because of the timing, which will mitigate or exacerbate the gloom on May 6. A No would surely lead many to question whether their achievements in government have been worth the candle; a Yes would give potent answer each time that question was raised.

As for rebuilding the machine, the answerâ€™s simple to identify but difficult to do. Like other parties of government, itâ€™s about delivering the policies that the core vote and a large enough segment of floating voters will appreciate. For the Lib Dems – who used to have a huge number of floating voters, including many â€˜antiâ€™s – thatâ€™ll be no easy task. But whatâ€™s the alternative?