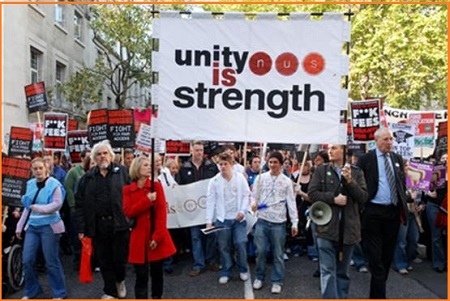 I should make clear that while I am not involved in the Cambridge occupation, many people I know are. As someone who is strongly skeptical about whether students can really be motivated, this wave of occupation and protest is looking to me more and more like a game-changer.

The number of student occupations is growing by the day – now a list including Cambridge, Oxford, UCL, LSE, SOAS, Kingâ€™s College London, Edinburgh, Cardiff, Leeds and many others. What happens next is interesting from both a political and a betting point of view.

In the short term, the staggering thing on the ground is the sheer levels of participation and the character of the demonstrators. Even if the core are the same die-hards who would turn up to any demonstration going, this is waking up a significant section of people on the periphery who just wouldnâ€™t have bothered, including a lot of my formerly apathetic (and non-voting) friends. The good nature and peaceful behaviour of many of the protests outside London, including (by and large) in Cambridge, is desanitising the idea of direct action to a lot of students.

Most notably, this is an incredibly media-savvy operation. At Cambridge there were produced, mixed and edited videos out within hours of the occupation, highlighting the actions of the police and the good nature of the demonstrators. We should expect students nationwide to get better and better at controlling the narrative in the coming weeks and months.

Nick Clegg has written to NUS President Aaron Porter to try and cool heads, but it may well be the case that the scale of the occupation fever gripping universities means that the NUS will shortly be overtaken by events outside their control. They were, frankly, never really a comfortable channel for an increasingly anti-political and anti-establishment brand of student anger. Porter is hardly the flavour of the month for promising, and then reneging, on an offer of legal assistance he was never in a position to give The NUS is now backtracking, desperately trying to recapture the voice of a multiplying and diversifying student movement.

Make no mistake that this is one of those â€˜eventsâ€™ which might just keep on gaining momentum.

The dangers this poses for the coalition are probably twofold. Something which will be key, and probably needs to be polled, is the scale of broader public support for students. If this wave of protest can be coalesced into a broader movement involving other public-sector unions – and make no mistake about the level of student desire to make that happen – things have the potential to get very uncomfortable indeed for the Government. It may not even necessarily require a national figurehead like the NUS to achieve, depending on how unions feel about demonstrating solidarity.

Also, Lib Dem MPs in student-heavy constituencies will be realising that they will be personally held accountable to this enraged electorate at the next election. If this is a game-changer in the way young people engage with politics, and there is a serious chance that it is, they will have to begin listening and wondering just how secure their seats are. Even if an election is years away, a career-defining vote on tuition fees is not.

A quick look at Betfair shows little interest in betting on a 2011 GE right now, but I would seriously entertain it if decent value was appearing. Is it a 5/1 shot that the Lib Dems will crash out of government on a wave of student sit-ins? Probably not. Could this be a catalyst for something bigger, or expose deeper rifts between the wings of the junior coalition partners? Very possibly.

Gerard is a regular lurker and has posted the occasional comment