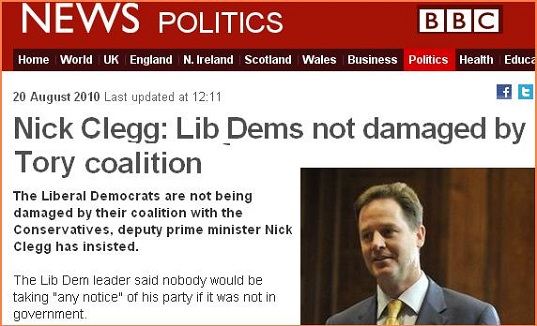 Would it have been worse without the coalition deal?

In a Radio 4 interview to be broadcast on Sunday night the LD leader and deputy PM, Nick Clegg, asserts that his party would be in a worse position in the polls if they had not entered into the coalition agreement with the Tories.

If they had stood aside then nobody would be taking any notice of the party now.

The BBC report goes on: “Being in government meant the Lib Dems were able to make progress with a “liberal agenda,” he argued. “If we weren’t in a coalition now I don’t think people would take any notice of the Liberal Democrats…”If we were in a coalition with Labour, arguably our identity crisis would be even worse…Mr Clegg said that despite his apparent closeness to Mr Cameron they were “tough with each other” behind closed doors.”

My view is that they were on a hiding to nothing – for if the party had turned what appeared to be a generous offer on May 11th then details would have seeped out and the party would have looked as though it wanted to remain irrelevant.

Labour were not prepared to take the situation seriously and looking back it is hard to see what else the Lib Dems could have done.

One thing’s for sure – next month’s party conference in Liverpool will get a lot more attention than if they’d been no coalition.

Clegg also confirms in the interview that the party will stick with the coalition even if voting reform does not get through.