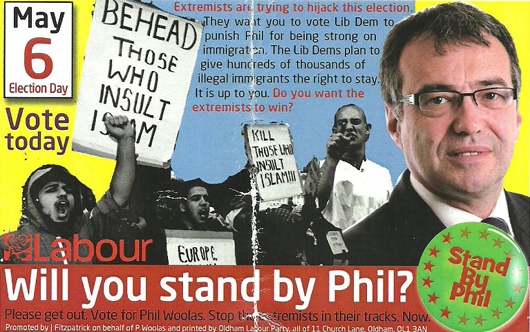 What’ll happen if the court orders a re-run?

The above leaflet is one of a number that will be the subject of a special hearing on September 13th by an election court in a case brought by the losing Lib Dem candidate in Oldham East and Saddleworth, Elwyn Wilkins.

He’s claiming that the result was swayed by Labour leaflets containing false claims about foreign donations and support from Muslim extremists.

This is a highly unusual case that could just end with the election being re-run. Certainly the campaigning teams of the three main parties are drawing up plans which they can swing into action immediately if the court rules that there has to be a fresh election.

This was the result in the seat from May 6th.

If there was a fresh election it would be quite hard calling the result.