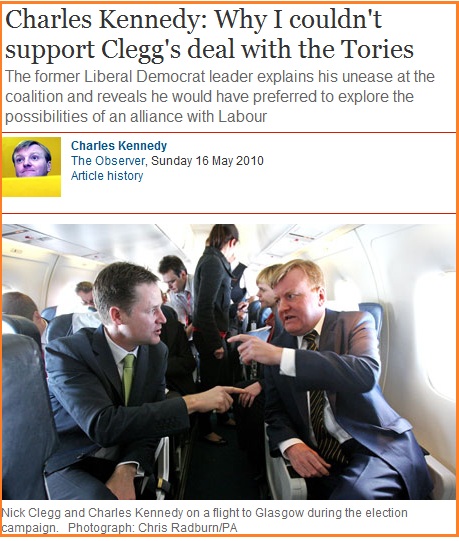 Are the new LD ministers the ones who ousted him?

Spare a thought this May Sunday for the former Lib Dem leader, Charles Kennedy, as he surveys what is happening to his party four and a quarter years after he was ousted.

How does he feel about the fact that many of the colleagues who are now being driven about in ministerial limos are the same ones forced the issue of his leadership in January 2006?

And the Prime Minister that the coalition is keeping in power is the same David Cameron that caused him so many problems after becoming Tory leader in December 2005. Arguably Kennedy was Cameron’s first scalp.

For in the days after Cameron’s elevation all the focus was on Kennedy with suggestions that the Lib Dem leader did not have the charisma of the new Tory and then Labour leader, Tony Blair.

It wasn’t long before the rumblings within his party started and the betting opened on who was going to replace him. By the end of the month Kennedy felt bound to issue a statement saying that he was staying and none of his party critics were prepared to go public.

A week later, however, he was gone after senior colleagues forced the issue of his drinking.

Maybe this puts his current position into context?