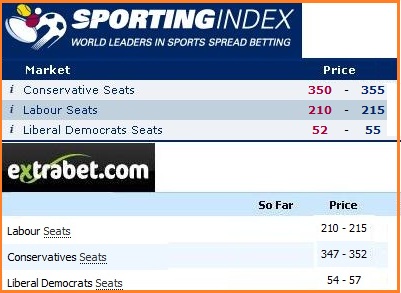 Have the markets got them priced too high?

There’s been little reaction overnight on the spread-betting markets to the YouGov and Ipsos-MORI polls with Conservative leads of 7% and 8% respectively. These are gaps that take us firmly into hung parliament territory – a situation that’s reached with a Tory seat total of 324.

Compare that with the spreads above. SportingIndex at 6am had a range of 350 – 355 seats which is well above the hung parliament threshold and the seat total suggested in the two polls.

I’ve had my first main party spread bet for months with a sell of the Tories at 350. The media narrative is likely to be shaped by these two surveys much more than the PB/Angus Reid poll which still has Labour on 24%. It might be that the latter is getting it closer but if you bet to trade like I do it’s market sentiment that matters.

Labour’s problems in all of this are the desire for something different and the continued unpopularity of Mr. Brown. ICM only a few days ago had 66% saying it was “time for change” with just 25% agreeing that “Continuity is important – stick with Labour“.

In the MORI approval ratings Brown has recovered a bit on December but is still down on November and has a double digit deficit compared with Cameron.

The betting is going to be driven by the polls and if it is anything like last time then ICM and YouGov will be the ones the markets take note of most.